If the war against terror is truly the long struggle our leaders say it will be, then so too will be the struggle to set the right balance between security and liberty. This program provides valuable information that will help Americans come to grips with the difficult choices we face.

Share on Reddit Introduction Recently, my girlfriend and I shared a romantic evening in true University of Chicago fashion by attending a panel discussion hosted by the Chicago Friends of Israel. The panel was called, "Defending Democracy: Posner and McCarthy were there to argue that civil liberties will have to give way to security concerns if the nation is to survive the threat of nuclear and biological terrorism, while Stone was there to present the opposing view.

The panelists covered quite a bit of ground, from role of the criminal justice system in combating terrorism to the legality of the NSA's wiretapping program, and in the present article I've attempted to represent their remarks as faithfully as my extensive notes and my memory allow.

I haven't completely followed the flow of the talks, but have rearranged the order of many of the points and ideas so that they hang together on the page a bit better.

Also, in a few places I've rephrased the speakers' points Civil liberties vs national security my own words. The end result is that this article is my own presentation and interpretation of the points and arguments that the speakers made, and not a simple transcript of the talks themselves. I begin below with a brief introduction to the three panelists, followed by summaries of their remarks.

I then give my own responses to some of the issues raised in the panel discussion, and I conclude the article with some big-picture thoughts on the relationship between civil liberties and the survival of America as a self-governing democracy. I hope you find the panel as thought-provoking and disturbing as I did, and I also hope that more such organized discussions can take place on campuses and in community centers across America.

This is a conversation that we all should be having.

The panelists As a judge on the U. Court of Appeals for the Seventh Circuit, Richard Posner is perhaps one of the most prominent legal theorists currently on the federal bench. Ars readers may be most familiar with him for his involvement in the Microsoft antitrust case. Andrew McCarthy is a former federal prosecutor who specialized in counter-terrorism.

He was part of the team that brought to justice "the blind sheik" Omar Abdel Rahman, the man behind the World Trade Center bombing. 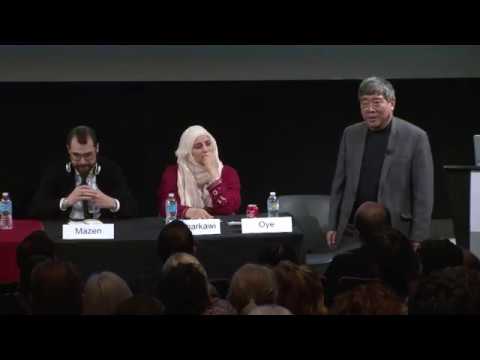 McCarthy is currently a senior fellow at the Foundation for the Defense of Democracies and a frequent contributor to the National Review. Geoffrey Stone is a professor of constitutional law at the University of Chicago law school. His most recent book is Perilous Times: Stone is also one of fourteen prominent constitutional law scholars who signed a lengthy and detailed letter to Congress outlining the illegality of Bush's circumvention of the FISA statute for the purpose of domestic electronic surveillance.

McCarthy McCarthy's talk was well-organized, and he drew heavily on his experiences as a federal prosecutor. McCarthy took as his starting point a simple question: He then suggested that the answer depends on the context in which you ask the question.

The due process context "When lawyers ask the question," said McCarthy, "their focus is on due process"—i. If this is your frame of reference for asking the question, then McCarthy thinks the answer is easy: McCarthy characterized his participation in the criminal justice system's fight against terrorism as the part of his life of which he's the most proud.

In 29 cases over the course of McCarthy's career, terrorist suspects were brought into custody and due process worked fine for determining their guilt and bringing them to justice. But do those 29 successful prosecutions mean that the criminal justice system as a whole was percent successful in neutralizing terrorists?

The national security context This brings us to the second, more important frame of reference for asking the question with which McCarthy started his talk, and that's the context of a national security strategy.

In this context, McCarthy thinks "the jury is back" on this answer as well: McCarthy used the law-enforcement phrase "the point of the spear" to describe the institution that shoulders the primary burden for addressing a problem.

Notice the convenient limitation of this criticism to the Clinton years, despite the fact that this has been true since at least the s.

McCarthy invoked this eight-year period multiple times in his talk. Once in the criminal justice system, the terrorists could be prosecuted and neutralized. The problem with this prosecution paradigm for combating terrorism is that it's fundamentally reactionary—we primarily prosecute criminals after they've already committed a crime, not before.

In the case of a terrorist, the ideal would be the prevention of a catastrophic attack, and not some sort of after-the-fact punishment that, given the modern terrorist's willingness to be "martyred" for the cause, would likely have to be left to a Higher Power anyway.

McCarthy drove home this point by noting that, of the 29 successful terrorism prosecutions in which he participated, almost all of them were after-the-fact responses to an act of terror that had already occurred. The important exception was the spectacular "Day of Terror" plot against the US, which the feds were able to prevent only because they had an inside mole feeding them intelligence.

Thus the criminal justice system's fundamentally reactive approach to counter-terrorism is destined ignore the vast majority of terrorists because they haven't yet committed a prosecutable offense that brings them to the attention of the system.

Too high a threshold In addition to its reactionary nature, McCarthy highlighted some other features inherent in the design of the criminal justice system that make it unsuitable for counter-terrorism. To summarize his extensive remarks very generally, you could say that the high standards of evidence and procedure set by the criminal justice system and the Constitution are there so that the system errs on the side of the accused.

Thus the guilty can some times "get off on a technicality," an aspect of the system that causes law enforcement no end of grief but that is in fact a feature, not a bug.The Department of Homeland Security integrates civil rights and civil liberties protections into all department activities.

Results and Reports DHS has achieved significant results for civil rights and civil liberties by providing proactive support for integration of protection into all DHS activities and policies.

Feb 19,  · Security vs. Civil Liberties The debate over liberty and security has always been difficult, but the communications revolution coupled with the rise of . Civil Liberties vs. Security: Public Opinion in the Context of the Terrorist Attacks on America Darren W. Davis Michigan State University Brian D.

Silver Michigan State University In the tradition of research on political tolerance and democratic rights in context, this study uses a national survey of. National Security vs. Civil Liberties Essay. Abstract. In the history of America, there are several events when national security and civil liberties were challenged - National Security vs. Essay personal sacrifices to be made in order to keep the nation "safe and free." With mixed results, it has become a common practice throughout history to restrict personal freedoms in the name of national security. Many questions arise from this . Balancing Act: National Security and Civil Liberties in Post-9/11 Era By Carroll Doherty The revelations that Obama administration secretly collected phone records and accessed the internet activity of millions of Americans have raised new questions about the public’s willingness to sacrifice civil liberties in the interests of national security.